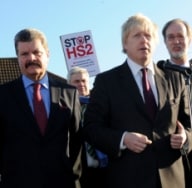 During the London Mayoral election campaign in 2012 Boris Johnson was promoted locally as the London Mayor who listens to the concerns of outer London and as someone in touch with the issues and concerns of residents in boroughs like Hillingdon.  Indeed Boris made several visits to Hillingdon and met residents in Hillingdon and made all the right noises about fighting projects like HS2.

I was therefore extremely surprised to hear Boris speak in support of HS2 at the Conservative Party conference a couple of weeks ago.  He seemed to praise the project and referred to it as “vital to joining up our great cities”.

Of course, at the moment, he is steadfast in his opposition to a 3rd runway at Heathrow, but I suspect that is only because he is so tied up in his own pet vanity project of a new airport in the Thames estuary, dubbed “Boris Island”.

Boris is making quite a habit of saying one thing and then doing another, much to the detriment of outer London & Hillingdon in particular.  He appeared on Television claiming to fight for the green belt and our open spaces.  During an interview on the BBC London News Boris said that he was “getting increasingly concerned about the amount of proposals that came across his desk for schools to be built on green belt land” and how he would insist that brown field sites were used in preference, then just a few weeks after that he rubber stamped plans to build a school on Lake Farm / Botwell Common.

Now after appearing to support the campaign against HS2 he has now come out as being in favour of it.  I suspect that his speech praising HS2 was more to do with his own political ambition of moving into Number 10 rather than his role as Mayor for London, but it still felt like a kick in the teeth to all those locally that were “Backing Boris” just over a year ago.

I would like to close this column by reiterating that on Hillingdon Council we have, and we are proud of, all party opposition to both a 3rd runway and HS2.  However it seems that Boris has yet again said one thing and done another and in doing so has kicked the people of Hillingdon in the teeth once again.