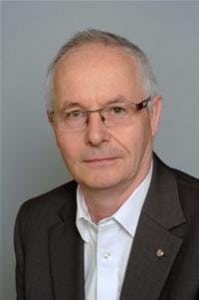 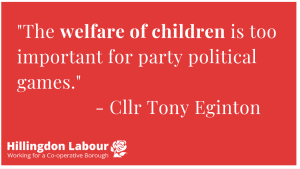 A Hillingdon Labour Councillor has reacted to the Council’s decision to scrap the corporate parenting board and removal of Councillors’ right to scrutinise council policy on vulnerable children in care, by expressing his worries that lack of scrutiny could lead to a ‘Baby P’ situation.
Cllr Tony Eginton, Hillingdon Labour’s lead on Social Care, has been raising concerns of new Council procedure for the past year and believes the Council’s latest move to refuse sharing information on vulnerable children to Councillors is damaging in the long run and risks children’s welfare due to the lack of oversight and scrutiny.
All Hillingdon Councillors are corporate parents and have a responsibility for children in the care of the London Borough of Hillingdon, but Council officers have recently refused to respond to a request by Cllr Eginton over the number of children in care in the Borough. This means that Council procedure and policy on children’ in care is exclusively in the hands of Council staff and the Leader of the Council.
Commenting on the refusal of the Council to provide such information, Cllr Eginton said:

“Being able to oversee what Council staff and the leadership of the council are doing is a key aspect of being an elected Councillor, especially when it comes to the welfare of children that have been placed in care of the London Borough of Hillingdon.

“This change of rules to prevent Councillors from having this oversight makes me worry that we could see a ‘Baby P’ situation on our hands because Councillors simply do not know what is going on – and it will of course be our fault if we fail to protect the children we have been tasked with taking care off. What are the Council trying to hide?

“The Council should recognise this dangerous precedent that has been set, revert back to the old rules, and allow Councillors to get on with doing their jobs – especially our jobs as corporate parents. The welfare of children is too important for party political games.”