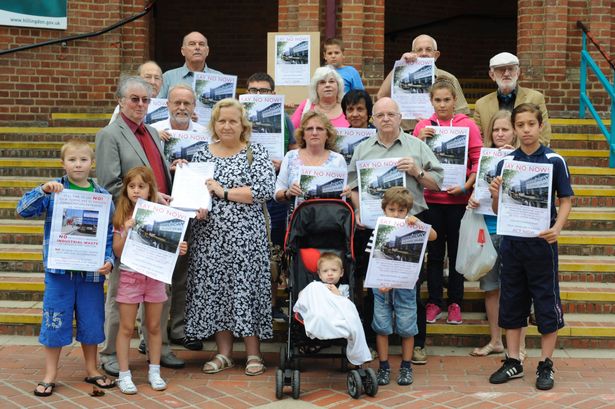 The long running fight to prevent Powerday from operating an industrial recycling plant at the old coal site in Tavistock road seems to have been won by the strength of the local campaign by the residents of Yiewsley and West Drayton.

In a press statement released on 20th January Powerday confirmed that it was not going to appeal the decision of the London Borough of Hillingdon to refuse its planning permission to build a Materials Recovery and Recycling Centre at the Coal Yard Depot, and was also withdrawing an Environmental Impact Assessment Scoping Report which was submitted in December 2014 to Hillingdon Council Planning officers in preparation for a revised planning application for a plant with reduced capacity.  The statement goes on to say that Powerday will, in the immediate future, be concentrating its business growth at its existing facilities across London.

West Drayton’s Labour Team Cllr Janet Sweeting and Cllr Janet Duncan, who were founder members of the Garden City Estate Residents’ Association which has led the fight have been active participants in the residents’ campaign throughout their six year battle.  On hearing this news Cllr Sweeting said,

“This is great news and testament to the hard work and constant campaigning of the local residents.  The residents have steadfastly opposed this proposal from the outset and after a six year battle we now find that a large company like Powerday are backing down on their proposed development, this is truly people power in action.”

Cllr Duncan also expressed her delight at this news, but also advised residents to remain vigilant, and said,

“Although the news is good news, the statement goes on to say that ‘the company will now consider options for the Tavistock Road site and will consult with Hillingdon Council, local residents and community groups, together with existing occupiers and Network Rail.’

It should also be remembered that Powerday still have a lease for the site until December 2017, and that Hillingdon Council has given them a three year contract to continue their ‘Waste Weekends’ on the site for a further 3 years.  So the residents and the local community as a whole needs to keep a close eye on this site and any proposals that may come in the future, but in the meantime we can all celebrate the good news.  The residents deserve a huge pat on the back.”