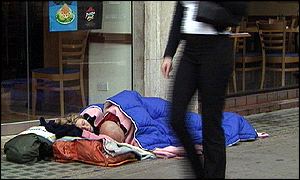 Recent Government statistics have shown a significant rise in the number of rough sleepers in Hillingdon. As rents in London continue to increase by more than 10% each year a growing number of local residents have found themselves either homeless or in so called ‘beds in sheds’.

Hillingdon Labour Group Leader Cllr Peter Curling, has highlighted worrying new figures from the House of Commons Library which show that the number of rough sleepers in Hillingdon has increased by over 700% since 2010, faster than any other London Borough.

Cllr Curling blamed the problem on the failure of the Coalition Government and Mayor of London to build enough new homes. Under David Cameron, home building has fallen to the lowest level since 1924 and Boris Johnson has missed every single one of his own targets for building more affordable homes.

Labour Group Leader Peter Curling, said: “It’s no surprise that these worrying new homelessness figures come at a time when the Government continue to push through its chaotic welfare reforms, while showing such complacency on the housing crisis in London.

“On top of this, the Council’s current Tory administration have failed to get a grip on the issue locally, with large amounts of taxpayers’ money being spent keeping parents and young children in substandard Bed & Breakfast accommodation due to a lack of available housing.

“As a Labour Group we continue to do what we can to support those most of need of help – but until the Government show a proper commitment to building more affordable homes, more families in Hillingdon will face the prospect of not meeting their soaring rent payments at the end of the month.”

Sadiq Khan, Labour’s Shadow London Minister, added: “The growing housing crisis is affecting thousands of households across London. For some of those on the lowest incomes, this means the real prospect of being forced out of their homes and into homelessness. Until the Government provide real backing for councils wanting to invest in affordable homes and get rents down, it’s likely these homelessness figures will get worse before they get any better.”