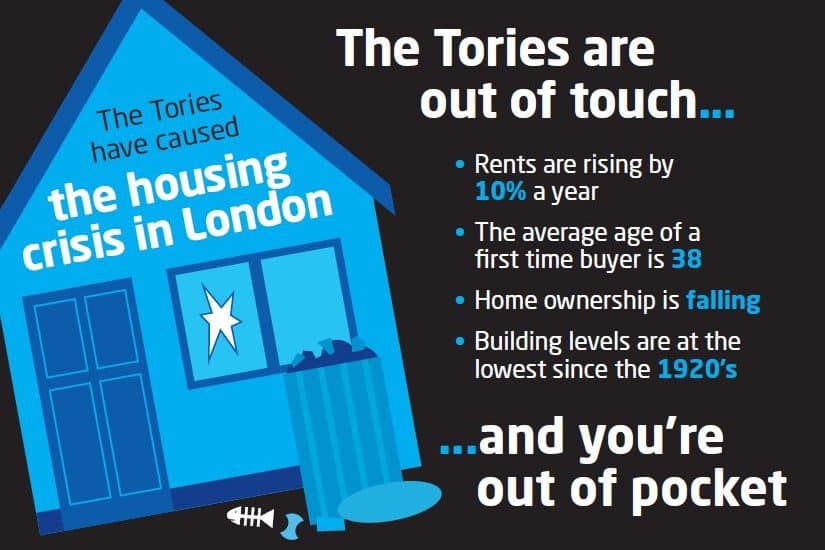 One of the biggest problems facing the borough is the increasing housing crisis caused by the policies of the coalition government and the draconian housing strategy of Hillingdon’s Tory controlled council.

It is a very worrying fact that the number of rough sleepers in Hillingdon has grown substantially and at a much faster rate than any other London Borough with a rise of over 700% since 2010.

The Tory led coalition government has cut housing benefits and introduced the bedroom tax but have failed to do anything to curb the excesses of private landlords who have racked up rent levels way beyond those on low or even moderate incomes.  Private sector rents are now rising at a rate of 10% per year.

Under David Cameron’s government, home building has fallen to its lowest level since 1924 and London Mayor, Boris Johnson, has missed all of his targets and sits on large areas of land within the Greater London area which could be utilised to provide homes for the ever increasing number of homeless people.

I would also add here that despite rumours currently being spread by the leader of the council, Hillingdon Labour group have no plans to build housing on Green belt land.  Indeed we have strongly opposed his policy of building on the green belt as he has done at Botwell Common / Lake Farm.

Hillingdon’s Tory administration has also contributed to the housing crisis by implementing a new housing strategy that has effectively discharged the council’s housing duty to the private sector making it virtually impossible for anyone on a low income to access truly affordable rented accommodation.

Even though we now have an epidemic of rough sleepers in the borough and an ever increasing number of “Beds in Sheds”, not to mention the huge rise in the number of people being housed in bed and breakfast accommodation (at a huge cost to the council tax payer), the Tories are still in denial that it is their policies at a national, regional and local level that is causing it.

In the 1960’s notorious private landlord Peter Rachman was accused of driving Londoners from their rented homes for his financial benefit. Rachmanism, as it became known, was once defeated by the policies of Labour and Conservative governments of the past but this Tory government, Tory Mayor and Tory council are doing all they can to promote it.